What the First Lady chooses to wear on her first day in her new role is historically significant. Her inauguration ensemble will be photographed, broadcast around the world, analyzed, and eventually, make its way to the Smithsonian. 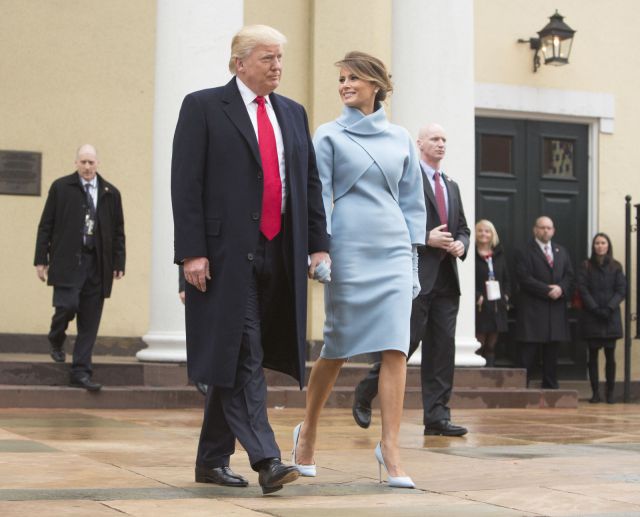 Melania Trump in Ralph Lauren for the Inauguration.

First Ladies often use the occasion to set the tone for their image throughout their term. Jackie Kennedy wore a simple yet chic suit, coat, and pillbox hat designed by Oleg Cassini, who was her preferred designer throughout. Kennedy had already established herself as a fashion icon amid New York’s elite society. As one of the first First Ladies to have a televised inauguration, Kennedy had a keen sense that her fashion choices would drive trends for decades to come (more on that in a minute).

Michelle Obama wore a citron-colored Isabel Toledo dress and coat, Nina Ricci cardigan, Jimmy Choo heels, and J.Crew leather gloves to her husband’s first inauguration. That fashion mix—a dress and coat by an American designer, accessories from an accessible-everywhere brand like J.Crew—set the tone for how Michelle Obama would use fashion to support American designers, particularly designers of color, and to present an image of accessibility—of “just like us”-ness. “First ladies traditionally stick to one designer, but Mrs. Obama made a point of wearing clothes from a wide range of young, multi-cultural designers, which sent a message of inclusiveness and great support for the fashion industry”. 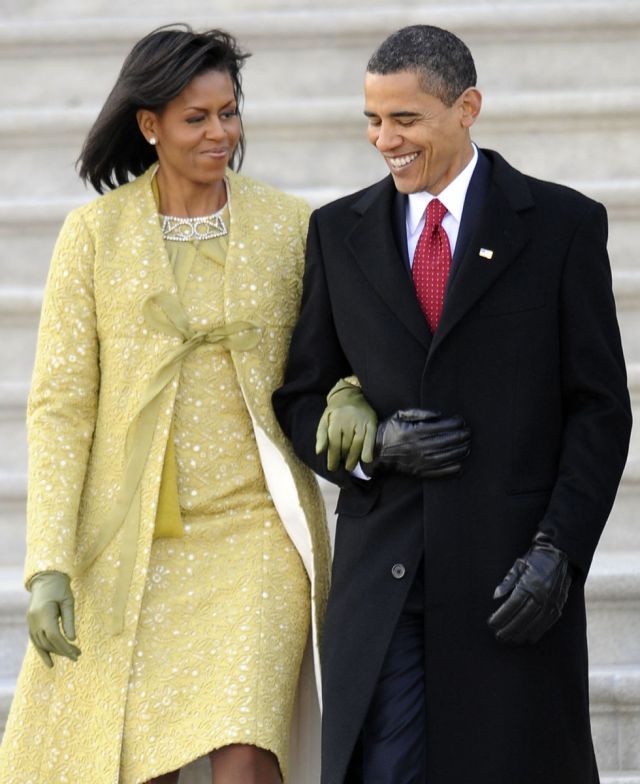 Michelle Obama in Isabel Toledo in the 2009 Inauguration.

While dressing the first lady for her first appearance as a resident of the East Wing is usually a clearcut honor, the latest iteration of this cyclical event has caused more controversy than celebration. Melania Trump’s fashion choices have been divisive since the start of her husband’s campaign. Many designers, loyal to Michelle Obama and the support she had given them, or just opposed to Trump’s platforms, voiced opposition to dressing the incoming First Lady.

Controversy aside, what the first lady wears–as Jackie and Michelle and all those before and in between understood—makes history. It sends a message. It is, like it or not, part of history. (The Smithsonian agrees.) For the inaugural parade today, Melania Trump has chosen to wear a powder blue shift dress, cropped wrap, elbow-length gloves, and matching pumps by Ralph Lauren. Her look takes a very literal page from Jackie O’s inaugural look and overall style.

It’s a look that, overall, is very safe, if a bit costume-y (dye-to-match pumps!). As our first reality TV President enters office, this is a family that is undeniably aware of what works on TV, and this look is very on-the-nose, Jackie Kennedy-inspired, “presidential.”

What’s the larger significance of this look? That Trump chose an American label is likely no accident—during past campaign appearances she has worn European labels like Gucci, Roksanda Ilinčić, and Dolce & Gabbana, despite her husband’s campaign platform of supporting not just American brands, but products made in America. Of course, Trump’s own fashion line is made in Asia, as is much of his daughter’s. (Though that’s a hard game to win: much of American fashion, including some of Ralph Lauren’s label, is produced in Asia.) Ralph Lauren is also a notable choice considering this was Hillary Clinton’s preferred label throughout her campaign–she wore the designer to accept her nomination at the Democratic National Convention, the presidential debates, her opening campaign rally, and her concession speech.

Clinton in Ralph Lauren at the DNC, second presidential debate, and her concession speech.

ver the past eight years, Michelle Obama showed us the power, grace, and diplomacy that the first lady can impart through her fashion choices. Fashion was of course not the only industry or world that she impacted—far from it; but it was a realm in which her influence was deeply felt. Will Melania’s impact be as profound?